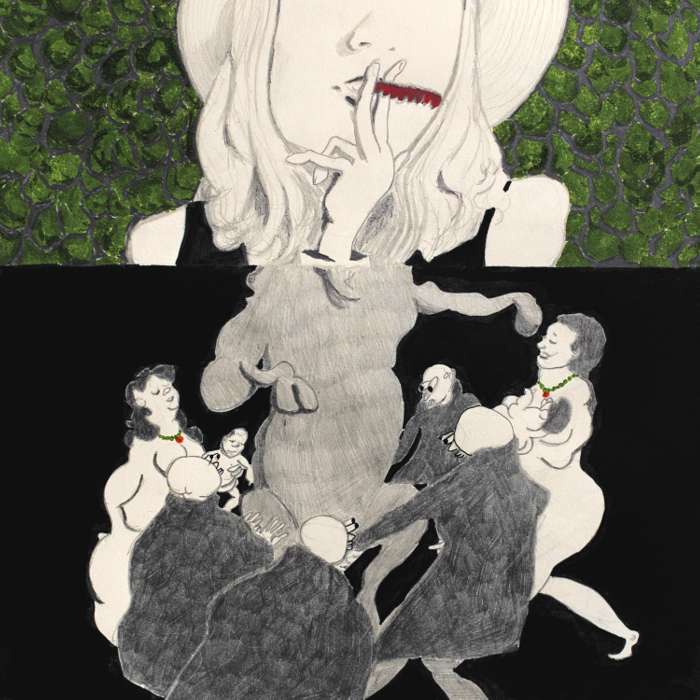 The second EP from Jackie Cohen

I had the blues but now I’ve gone a bit green. Worried. Can’t sleep. What do you think it is? Probably nothing. Neck looks swollen. Does my neck look really swollen to you? Hand’s numb, too. Left one. The death one. You know, I did see Death about an hour ago, waving at me from an apartment window across the way. Maybe let’s say our goodbyes now, just in case?

The second head of Jackie Cohen’s two-part Siamese twin Tacoma Night Terror EP set, the gloriously-titled Self-Fulfilling Elegy, at once declares itself the cocky counter-peak to the previous release’s valley of gloomy, anxiety-fueled observations. It opens with the big, Hunky Dory strut of “Make U Sick,” all hutzpah and hot-head swagger and hopped-up disregard for proper spelling. But it’s only the high before the low. By the time we land on torch song “It’s Rainin’ Again,” the moxie has burned off and Cohen’s once again bedridden and reaching for the mirtazapine. The whistles and moans of mental health across this set of songs are bold and often hilariously garlanded. In the brilliant closing song, “I Hate My Body,” Cohen turns her body dysmorphia and pathological clenching (“My eyes feel like chestnuts on a fire/My back is all busted up/My BPM’s way up/My shit is aching”) into a big, dazzling Rockette’s Spectacular high-kicking finale that alone is worth the price of admission.

"Jackie Cohen’s hazy, dreamy Americana is for those overthinking, sensitive souls who like their delicate melodies with a literary edge." — The Line of Best Fit

"Sleazy-listening glam, an exploration of a fabulous never-was 70s boulevard of the sort of broken dreams that only hot people have.” — The Guardian

"could fall under the category as an instant classic. At a minimum, it’s timeless." – The Revue